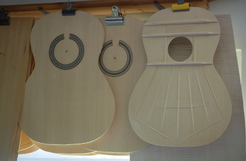 Specialist in manufacture of Spanish style 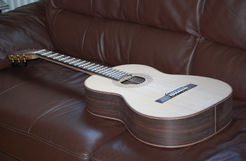 Hi, my name is Stephen Frith, thank you for looking on my web site. This is the official site for my work so this is the true reflection of my work on musical instruments and the history of design and artistic inspirations. I hope you find the pages interesting as time goes by I shall regularly update text pics and music. I have set up this site as a reliable picture of my work because of confusing entries about me from other sources.

Began making classical guitars in 1979 finished in that year working from library books. I took a carpentry apprenticeship to learn the tools and begin to get a grasp of wood grain. A few years later I studied musical instrument technology at London College of Furniture now London Met. Uni. where I was taught by H Schwatz and M Gee and a well designed education in the relevent sciences arts and music. It was at London that the model they taught (mod 1) was transformed by some strategies into my model 2 that was successful making almost 200 guitars. These strategies were briefly situating the strings parallel to the front, thinning the edge and making a dome of the front. Of course there was more to it but these are the basic experiments in music.

In 2001-2002 I made guitars under the direction of Jose and Liam Romanillos at Siguenza Spain. These were eye opening events in my life where many of my ideas were confirmed, and refined by one of the worlds great makers. I took the opportunity to work with both Jose and Liam to learn the techniques they use. Every moment during my time in the Siguenza workshop my eyes were taking in the templates, jigs, designs and methods.

During discussions about Torrres and Hauser guitars in Spain and England with Jose a new model 4 was conceived. Mod 4 is named Guijosa after the village in Spain where these meetings took place. Planning began in 2004, and the first Guijosa guitars were to follow shortly. The model 3 "Siguenza" and model 4 "Guijosa" are the main instrument now in production.

Seasoning wood in our Timber store 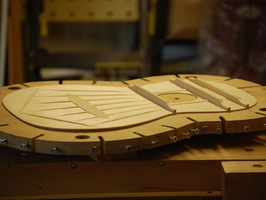 2002 and 2003 Stephen split spruce logs in Austria with Tobias Braun and coverted to fronts. This was of timber from the mountains above Innsbruck and the Bohemean Forest above 1000 m. The timber store also contains spruce from Gleisner in Germany from 1986 and cedar and sitka cut from wedges in 1999 from Alaska.

Preparing to fit the back in the traditional method

Indian Rosewood has been collected to season over the years in our woodstore and back side sets currently in use were aquired prior to 2004 some earlier. In addition are some flamed English field maple some walnut and cypress sets. All timbers season at least 2 years in my workshop before use. 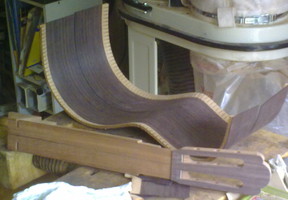 neck and sides prior to assembly

South American cedar and Mahogany from Brazil have been added to my woodstore over the years from as early as 1987 and again is well seasoned before use as necks and internal parts. All my ebony is kept for many years before use to make sure of the best stability possible.

Please use the navigation buttons at top of page to look at Guitar making, Repair and restoration services and Lessons page where in a free concert I play a model 4 solo guitar music.